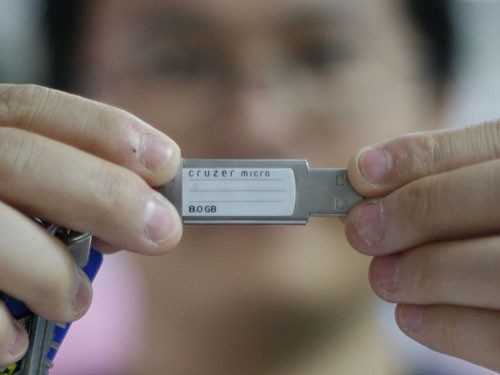 In Cuba, it seems that there are rules — and then there are ways around the rules in order to get things done or to satisfy needs. For the Castro regime, the emphasis has been on rules and controls the authorities exercise over the people and the country’s enterprises in conformity with Communist ideals. However, as things began to change, certain acceptable euphemisms and modified practices allowed new ways to enter the culture and still save face for the Revolution. 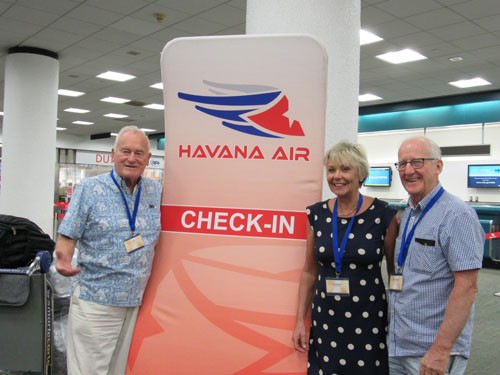 Our airport experience to and from Cuba is a good example of how this rules game works. Since the late 1960s, Cubans have been able to take flights to and from the island to visit their relatives and friends on “freedom flights” or “charter flights” made possible by President Lyndon Johnson. What was really surprising was that we all flew on an Eastern Airlines plane!

Eastern Airlines went out of business in 1991 but it has been running Boeing 737–800 charter flights from Miami to Havana since around 2010. The “new” company had purchased the rights to the old Eastern name and logo and formed a partnership with the HavanaAir charter company.

According to a May 2015 USA Today article:

“U.S. airlines can fly on routes between the U.S. and Cuba, but they must do so in conjunction with tour companies that are authorized by the U.S. to sell travel on U.S.-Cuba itineraries. Similarly, since travel must be sold by authorized tour companies, flights by U.S. airlines operate as charter flights sold via the tour-company.” 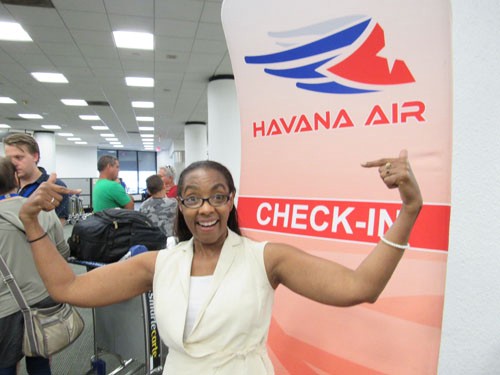 Our fellow Cuban travelers were not exactly there for a tour, but they were certainly on a mission. They were carrying cartloads of huge, blue, plastic-wrapped packages of consumer goods (TVs, electronics, appliances, clothes, etc.) for their families — or for sale to Cuban customers. They were getting around the embargo, and apparently they could do it legally via a “charter flight.”

Efficiency does not seem to be a value, at least for the Cuban airlines, but employing lots of people for make-work surely is. We encountered numerous steps on our check-in flight into the country with a long, snaking line to check-in and we ended up at the same counter but with a different person for each step of the process.

Then, when we arrived in Cuba, we faced a nursing team that checked our health status and a uniformed wand-holding security team in short, tight skirts that checked us for weapons and drugs. It was like nothing I’ve ever encountered — even in the old Soviet Union. Well, maybe Fidel tried to outdo the Soviets! 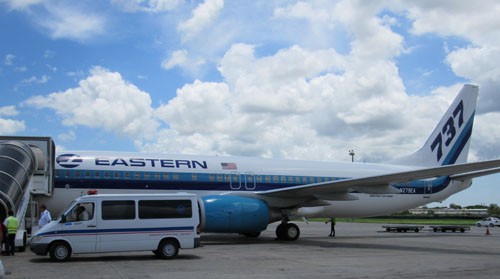 Meanwhile, as President Obama was conducting negotiations with Cuba on normalizing relations between the two countries, airlines like Jet Blue, Delta, Spirit, American Airlines and United have won clearance to offer direct flights from certain U.S. cities to Cuba as of fall 2016. Eventually Eastern Airlines will turn to scheduled service, too, says CEO Ed Wegel. That means that these expensive charter flights will probably be priced out of the market or at least reduced significantly and that’s a good thing. For example, to get to Cuba I paid $178 (from Detroit to Miami) and $745 for a charter (from Miami to Havana). This year, if I were to go to Cuba I could fly Jet Blue from Detroit to Havana with a layover in Fort Lauderdale and my airfare would cost a total of only $324 instead of $923. 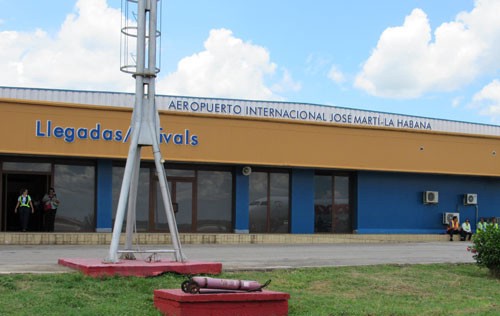 Our airport experience out of the country was equally instructive regarding a “massaging” of the rules. We stood for an extraordinarily incomprehensible amount of time in a long, unmovable line at the airport check in. And that was after our guide, Pavel, gave the clerks some money to get us all through the check-in. Apparently many other people payed a bigger bribe or personally knew the gentleman who was helping them cut the line!

Once we got to the check-in desk, there seemed to be a special clerk who took only the elderly customers. We had one octogenarian on our tour and once the clerk finished with him (15 minutes), she left her post to the only other clerk at that desk. About 30 minutes before our plane was to leave, this clerk excused herself saying she had to help passengers on a plane that just arrived

Evelyn freaked out. “How are we supposed to make our flight?”

Soon afterward, another clerk appeared and quickly checked in the rest of our group so that we boarded our plane just in time — even for those few of us who visited the duty free shop to buy that delicious Cuban rum.

Information is power, as any citizen knows. In a government that emphasizes control over information, there are some very interesting developments going on as a result of the Internet.

In Cuba, each province has a newspaper that usually features stories on the economy, progress on projects and various misfortunes around the world. Like in the USA, the newspapers’ greatest competition is the Internet because then people can get the news they want. However, the Internet is very expensive and unreliable in Cuba; even our five-star hotels had weak signals. The Cuban people, nevertheless, have a great desire to access the Internet, so they go to Wi-fi hot spots (hotels, public squares, parks).

Another source of information they get comes through paquetés (packets). For 3 CUCs (pronounced kooks) Cubans can download purchased programs on their computer. Although paquetés are illegal, the government looks the other way when people use them — as long as the programs do not contain pornography or political messages. In fact, through paquetés, Cubans are quite in touch with American films, news and television programs, said Pavel, our guide, who regularly purchases paquetés. No big deal! Everybody buys them!

Paladares and casas particulares are the new small, private businesses that have popped up all over Cuba over the past 25 years. They seem to satisfy a long suppressed need for entrepreneurship (i.e., capitalism), and the Cubans we met who owned these establishments had all the marks of businesspersons’ pride and confidence in their work.

Paladares are the privatized, state sanctioned, family-run restaurants of Cuba. They mostly operate out of people’s homes — or what was their home — and emerged after the Cuban government tried to open up the country to economic reform and international tourism in 1993. Paladares were one of the first and only enterprises to fall under these reforms, said the Cuba Junky.

At first there were tight controls: a maximum of 12 seats, no beef or lobster, ingredients purchased only at state stores, and at least two “family helpers” as staff. In 2011, the rules on these places loosened up further, according to Saveur and restaurateurs were able to make other cuisines from Spanish to exotic Indian dishes — and use a greater variety of imported foods and spices.

We were lucky to eat in the paladares because the owners are also required to cook authentic Cuban recipes and locally-sourced food, which were all delicious! However, the paladares are a peculiar lot in this Communist country: they are private businesses and one of the few taxed. Even so, they have flourished with a little help from tour companies who lead their tourist customers to their favorite paladares. According to the Cuban Junky, the paladares are a far cry better than the expensive state and hotel-run restaurants that have more limited choices.

We didn’t stay in any casas particulares, but we saw a lot of them, especially in the Viñales Valley in Pinar del Río, a UNESCO-designated Cultural and World Heritage Site. A casa particular is a private accommodation or homestay, very similar to a bed and breakfast inn although it can also be a vacation rental, full apartment and house as well as a room inside people’s homes with separate entrances. Like the paladares, they are a way for people to make some money to supplement their meager earnings of $20–30 per month.

It was in 1997 that the Cuban government allowed Cuban families to rent out space in their homes. The government owns all other types of accommodations (hotels, motels, campgrounds) so the term “casa particular” refers to this kind of paid lodging privately owned and operated. Casas particulares usually include breakfast in the price.

Religion is a sketchy subject in Cuba. Although nearly 60–70 percent of the people are Roman Catholic in name, less than 10 percent practice the faith. There are also many Protestants (2 percent), Afro-Cubans (2 percent), evangelicals (5 percent) and a small percentage of Jews and even Muslims. However, in reality, the country has been atheist for most of the Castro era and most of its people claim to be agnostic.

Although the government has gradually permitted more and more religious freedom over the past 50 years, it has also made certain “accommodations” to people who want to practice their religion. For example, since there were bans on the new construction or renovation of church buildings, many religious organizations used private homes, known as casas cultos or “house churches” for religious services. Estimates calculate that there are between 2,000 and 10,000 “house churches” in Cuba.

For more background on religion, see the blog article, “Religion in Cuba.”

I find it fascinating to see the ways people get around the rules be it a cumbersome bureaucracy or a restrictive government. In Cuba, maybe it is an art form due to its sordid past of having to put up with pirates, conquistadors, Cold War ideology, the U.S. embargo and the Special Period. Now that Cuba appears to be moving in many different directions, things will undoubtedly change. In another sense, it’s always fun to be a little naughty about rules whether you are a Cuban or an American.