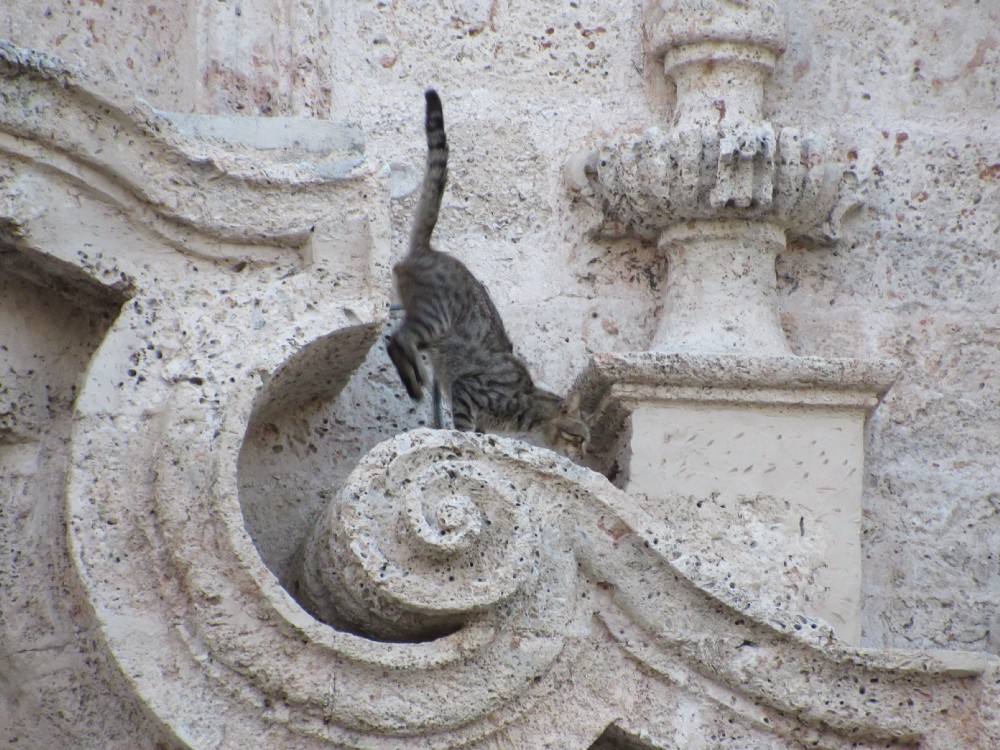 Kenneth Clark in his book, Civilization (1969), contended that architecture reflects the culture of its people. The architecture of Cuba is no different, especially as it has adapted to its history and geography.

Prior to the 19th century, Cuba created a new form of architecture called “Cuban baroque” for three major reasons. Builders used limestone because it resisted canon shot from pirates who loved to cruise the Havana Harbor and take aim. Limestone is porous with shell inclusions and more difficult to sculpt the fancy details typical of the baroque style, so Cuban baroque uses more modified design and decoration. Finally, because Cuban stoneworkers were not as skilled as its carpenters, the hulls of boats were used as roofs.

Most of the materials for buildings in Old Havana came from someplace else: marble from Italy and sand from the Nile River Valley for dado (the plain portion between the base and cornice of the pedestal of a column). Cuba’s wealth that provided funds for the erection of these majestic buildings resulted from its 19th century trade of “white gold” (sugar cane) and tobacco.

Old Havana was at first occupied by humble families since it was built outside the city’s walls. In the 19th century Havana decided to demolish these walls and so the neighborhood is called Las Murallas (the walls) to recognize what was once there. Most of the stones from the walls and old buildings were reused for renovation.

The central square of Old Havana used to be the marketplace but it later became the city’s downtown. Its streets used to be cobblestone but were replaced with ironwood (a common name for wood that is hard). Since the Revolution, the buildings around and near the central square have been renovated and converted for other uses like homes for the elderly, apartments, hotels, restaurants, bars, shops, offices, even a school. Tourism and taxes on private businesses help provide funds for renovation work.

Architecture in Havana was influenced by Europe and the United States. It includes a neoclassical style predominantly used in the 19th century when Cuba was a colony of Spain. With the 20th century came the modern era of Art Nouveau, Art Deco and other eclectic architecture. This period in one sense heralded the end of Spanish rule with the conclusion of the 1898 Spanish-American War when the Americans helped liberate Cuba. Celebration of this event ensued by expanding the center of the city. At this time, wealthy families built second homes in the “suburbs” such that in 60 years the city had filled in rural areas across the Almadares River.

You can witness the grandeur of Havana’s past with its wide avenues flanked by huge neoclassical and art deco buildings. However, ever since the 1960s, the roads have been deteriorating and the buildings are peeling paint badly.

The Cuban government has implemented a renovation strategy for Old Havana that involves keeping as much of the existing building as possible even though it may be used differently from its original intention. The government is also sponsoring studies of sustainable, alternative land uses including New Urbanist techniques promoted by Cuban-American architect, Andres Duany of Miami. These techniques include multi-story, mixed-use buildings filled with services and stores on the first floor and residences on the upper floors and a mix of people from different income levels all living together in the same neighborhood.

Renovation and re-purposing is also a slow, arduous and costly process so quick turnaround of these projects is difficult while issues like privacy, consistency of electricity and crowded conditions remain problematic. Cuba finds that it is more expensive to rebuild (which first involves demolition of the old building) than it is to renovate. Forty percent of the buildings in Old Havana have been recovered and restored, so there is plenty of work for future generations. Architects and engineers use traditional materials and techniques in their restoration work — and provide workshops for young people to learn how to do this work.

The buildings have deteriorated due to deferred maintenance, but water also plays a big part. According to Restore Old Havana, the corrosion of the city’s buildings is mostly due to the constant presence of water. Called aqueous corrosion, seawater can be devastating to structures whose foundations are not constantly repaired. The selenic concentration in seawater causes electrochemical changes in building materials, which is especially corrosive to metal and causes galvanic corrosion and aggressive rusting.

Additionally, it rains in Havana over 60 percent of the year, and severely damages the wooden foundation of many of Old Havana’s standing structures. Water builds up in the buildings’ wooden foundations and can’t totally evaporate due to the constant rains. The perpetual moisture buildup rots the wood over time and also attracts termites.

Today, hotels predominate most new construction because the government wants to accommodate tourists from Europe, Latin America, and even China. Income from tourism is lucrative — about $2 billion annually. Spanish hotel companies are legion but the Chinese are beginning to finance many new hotels, too.

It is significant to note that there are no homeless living on the streets. This isn’t just propaganda. We saw none! Instead, as part of the government’s socialist welfare plan, everyone has a home, even if it is in a deteriorating and broken down building — and there are plenty of those.

Dr. Orestes del Castillo, professor of architecture of Havana’s Office of the Historian

Anibal del Prado, architect from the Office of the Historian