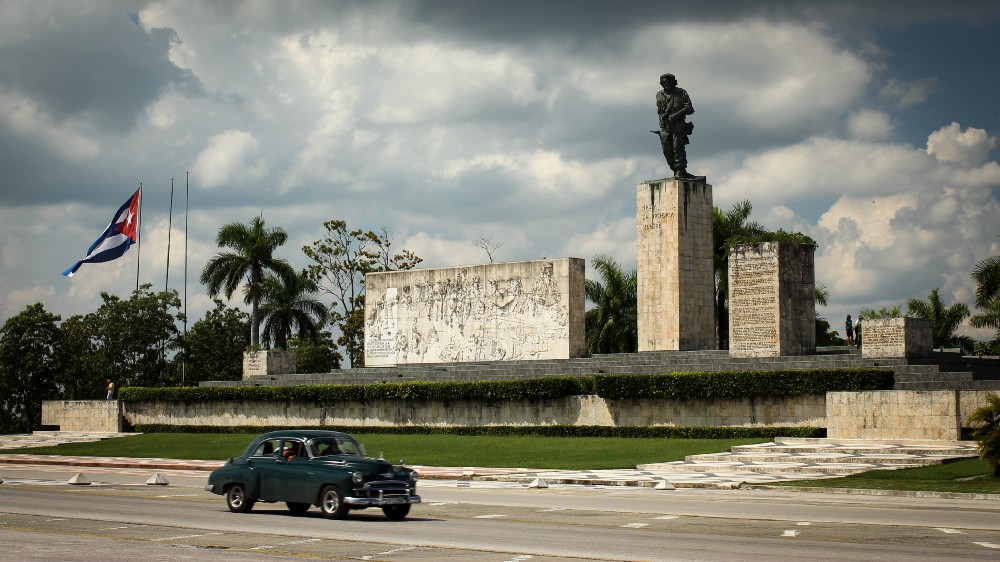 A Center of the Myth and the Man

We spent one morning visiting the Ché Guevara Sculptural Complex near Santa Clara. It features an imposing 22-foot bronze sculpture of Ernesto “Ché” Guevara carrying his gun on his shoulder and facing toward South America in a gesture of “continuing onward” in unity. At the base of the memorial is Ché’s motto, Beneath the sculpture is a mausoleum that houses the remains of the Argentine-born Marxist revolutionary and 29 of his fellow combatants who were killed in 1967 attempt to incite an armed uprising in Bolivia.

You must wait in line to go into the mausoleum. There is room for only a few people at a time and no cameras are allowed. The light inside is subdued and peaceful illuminated by a lone eternal flame that was lit by Fidel Castro in 1997 when the mausoleum was erected. The air conditioning is a welcome relief from the intense heat outside. You can feel the sacredness of the place.

What you find inside is a wall made up of small earth tone-colored stone with carved out niches for each of the Revolution’s martyrs with Ché’s in the middle. Each niche has a portrait of the martyr on a round plaque flanked by a rose. Only Ché’s niche has a lighted star.

In an area below the monument is an interesting museum that tells the story of Che’s life with a surprisingly large number of his personal items including an early drawing book and school reports, guns, asthma medicines, uniforms, tons of photos of Ché and his revolutionary life in the jungle and large posters calling attention to significant times of his biography. Unfortunately, explanations of these items were in Spanish without English translations. I’m sure as more and more American tourists visit Cuba, this is one forthcoming and welcome change. 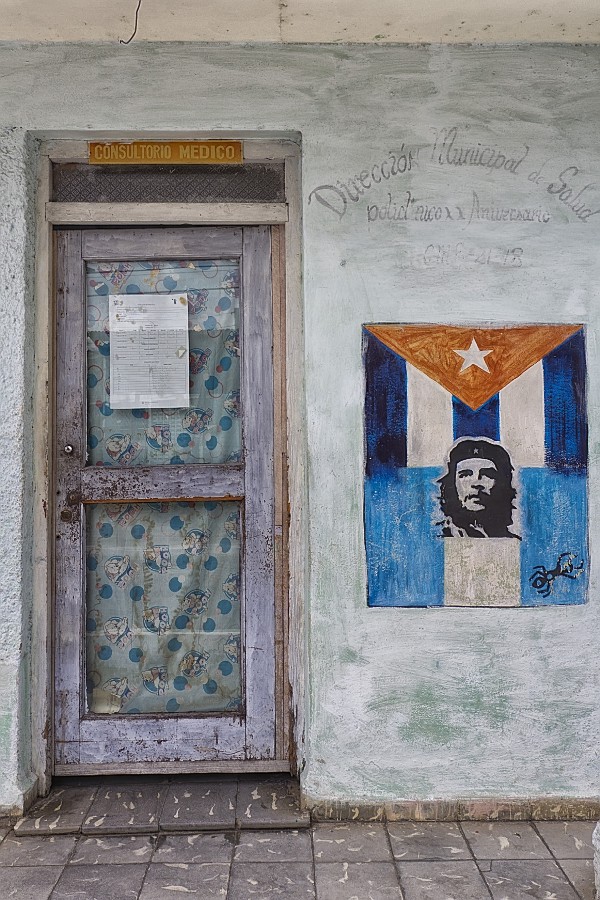 The citizens of Santa Clara remain especially enamored of Ché, which is undoubtedly the reason the mausoleum was sited here. It was in this area of Cuba on December 28, 1958, that he and a team of 18 revolutionaries blew up and derailed an armored train of the Batista government. It turned out to be a decisive battle before the end of the Revolution.

They found out that the floor inside the train was wooden, so they put fire underneath the train to penetrate and burn it up from within. This action led to the surrender of Batista who shortly afterward went into exile in the Dominican Republic and later in Spain. Castro and the Revolutionaries took Havana without a shot.

Ché participated in several posts in the new Cuban government under Fidel Castro, including planning to repel the invasion of Cuban exiles in the Bay of Pigs (1962) and in bringing the Soviet nuclear-armed ballistic missiles to Cuba, which precipitated the Cuban Missile Crisis (1962). Guevara left Cuba in 1965 to foment revolution abroad, first unsuccessfully in Congo-Kinshasa and later in Bolivia. However, the Bolivian army and the CIA tracked down Ché, killed him and buried him in an unmarked grave. They cut off his hands, preserved them in formaldehyde and sent them to Buenos Aires for fingerprint identification. Photos were also taken. In 1996, his CIA killer revealed where Ché’s grave was. His remains were then brought to Santa Clara and placed in the mausoleum dedicated to his memory. Ché was buried with full military honors on October 17, 1997.

I grew up seeing these revolutionaries on TV and regarded them as troublemakers who lived in the jungle and wore green khaki uniforms and berets. I did not then understand their struggle or the desperate conditions under which the people lived. But to some Cubans — not the exiles, of course — these revolutionaries were heroes intent on overthrowing 500 years of “conquistador” dominance in order to be free.

Seeing Ché’s tomb and museum did make me curious about him. I bought his book, Motorcycle Diaries (originally published in 1993), which documents his transformative coming-of-age travels through South America when he was a 23-year-old medical student. I want to read Michael J. Casey’s book, Ché’s Afterlife: The Legacy of an Image (2009) about the iconic Alberto Korda image of Ché and its wide appeal. Here is an excerpt from Casey’s book on the significance of the image:

“With his beret askew, his wispy beard, and his piercing eyes staring intently into the distant horizon, Ché is now everywhere. In its common form as a two-tone abstraction of Alberto Korda’s famous 1960 photograph, his image is simultaneously a potent symbol of resistance in the developing world, an anti-globalization banner, and a favored sales vehicle among globally engaged marketing executives. Korda’s image has given Ché what the Argentine-born revolutionary seemed to search for throughout his action-packed life: immortality. It gives true meaning to the popular slogan “Ché Vive!” (Ché Lives!) 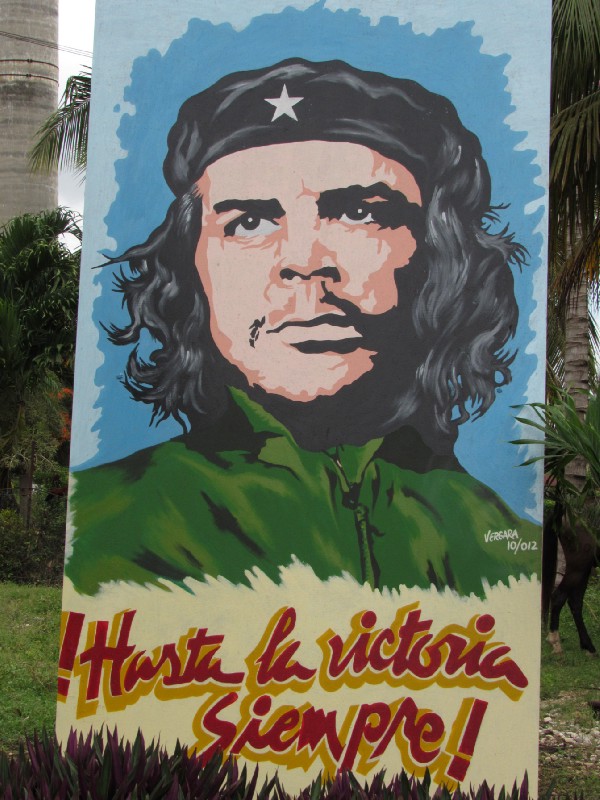 Guerrillero Heroico (Heroic Guerrilla Fighter), the famous portrait of 31-year-old Ché Guevara, was taken in the Cuban jungle by Alberto Korda on March 5, 1960, at a memorial service for victims of the La Coubre explosion. (The French freighter La Coubre exploded in the harbor of Havana, Cuba, on March 4,1960, while it was unloading 76 tons of munitions. Casualties may have been as high as 100, and many more were injured. Fidel Castro charged it was an act of American sabotage. The United States denied any involvement.)

Guerrillero Heroico embodies the spirit of the Revolution for what Ché regarded as a high-minded quest for the consciousness of “the New Man” who was driven by moral rather than material incentives. The revolutionaries were sincere in this quest, and Ché was their inspiration as were many other leftist movements throughout the world. Korda has said that at the moment he took the picture, he was drawn to Guevara’s facial expression, which showed “absolute implacability” as well as anger and pain. Years later, Korda would say that the photo showed Ché’s firm and stoic character.

Ché’s famous portrait is just one of the many myths and interesting stories about him. Even his name has a story. It arose from the Argentine custom of calling people “Ché” in much the same way that Australians call people “mate.” Guevara said it so often that the Cubans donned him the name with affection.